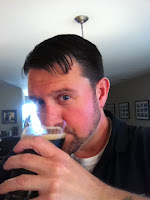 Taste: Roasted malt flavors and coffee are at the forefront followed by bitter sweet chocolate and a very nice dry finish.

Overall: Balanced, drinkable and delicious, North Coast Brewing Company’s Old No. 38 Stout is a beer that I keep in my beer fridge year round.  Not too heavy and at 5.5% ABV I can easily session this beer.  If you’re in the mood for fantastic Stout…pick up a six of this.  You’ll be glad you did!
Cheers!
Mark Harvey
Posted by Mark Harvey at 6:44 PM No comments: 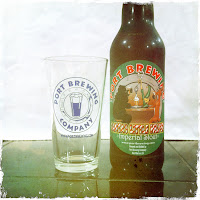 From the Port Brewing Company website:” Each and every year, the Jolly Old Fatman sits down and compiles a list of who’s been naughty and nice. It’s curious that he never knows which list to put our brewers on as this is one naughty but incredibly nice beer.

Originally brewed at the Pizza Port in Solana Beach in November of 1997. As dark as the biggest lump of coal Santa can deliver, this beer has earned a dedicated following and is code named Satan’s Little Hangover by those who have indulged in a holiday like manner from time to time.

Originally shipped from London to the Czarist rulers of Russia, Imperial Stouts are stronger, richer and more robust versions of traditional stouts. The increase in alcohol content means that literally, many of these beers are a meal in a glass all on their own. Made from copious amounts of Roasted and Black Barleys, our stout invites you to share a silky black body with hints of freshly pulled espresso from the coffee house, melding with dark bitter sweet chocolate from a Belgian Chocolateer and the ash of a smoldering fire on a dark winter’s night.

Just remember that somewhere out there, the jolly old fat man is making a list and checking it twice. He knows who’s been naughty and nice… Might we suggest that you forgo the Milk with the cookies this year and leave him of bottle of something incredibly nice- Say like Santa’s Little Helper? Mrs. Claus would probably like some as well. That is if Rudolph doesn’t drink it all himself. Bad Reindeer.” 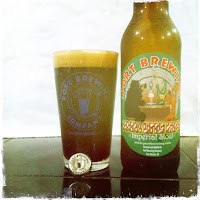 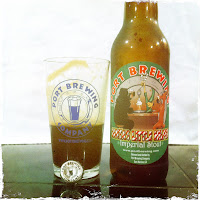 Overall: This beer is HUGE! Port Brewing Company Santa's Little Helper Imperial Stout is an excellent holiday beer, smooth and easy to drink, but be warned, at 10.5% ABV it will get you if you’re not careful.

Mark Harvey
Posted by Mark Harvey at 6:09 PM No comments: 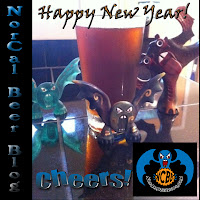 Just a quick note to wish you and yours a VERY Happy New Year!

2012 will be a great year.  I plan on moving to all grain brewing, more beer reviewing and more brewery visits.

Mark Harvey
Posted by Mark Harvey at 9:43 AM No comments: