Tonight’s featured beer is Dogfish Head Aprihop. I’ve been drinking Dogfish Head beer for some time now – long before Sam Calagione’s (founder of Dogfish Head Brewery) TV show “Brew Masters”. I would say the TV show brought a heightened awareness of their beers which in turn has probably brought a heightened awareness of craft beers in general (I could be wrong…who knows). Either way, I enjoy many of the beers Dogfish Head brews and I’m happy they are successful. When any craft brewer enjoys the type of success that Sam Calagione has it helps all brewers.  I have a great deal of respect for Sam and his adventurous brewing style.

From the Dogfish Head website: “Aprihop is our fruit beer for hopheads!
It is an American IPA brewed with Pilsner and Crystal malts massively hopped in in the continuous fashion. The flavor is complemented by the addition of Apricots.
After fermentation the beer is dry hopped with irresponsible amounts of Amarillo hops. The beer is hoppy in the aroma with the apricots playing a supporting complimentary role.
The flavor is rich with late hop flavors and its bitterness is tempered by just the right amount of malt sweetness and fruity undertones from the apricots.
This is one of our most popular seasonal beers and we've been brewing it each spring for quite a while now. We release the beer each March and you should find it on the shelves through May.”

Appearance: Pours a copper orange with a creamy white head and nice lacing.

Aroma: Toasted malts, citrus hops and apricot. How can you go wrong with fruit and hops? 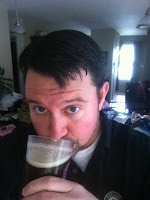 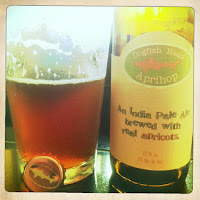 Overall: A smooth and tasty beer, Dogfish Head Aprihop is easy to drink for a 7% ABV beer. A great seasonal beer and one that I look forward to picking up each year. Perhaps off-centered for some, but I’m an off-centered person so it works.