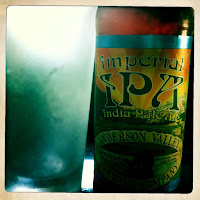 Tonight’s featured beer is Anderson Valley Brewing Company Imperial IPA.
As I’ve stated many times before (read about it here) I’m a fan of AVBC and their whole scene. I am particularly happy about the array of 12 ounce bottles they’ve been coming out with. Not that I’m against buying 22s, but there are times I like to enjoy a couple (or a few) different beers and a 22 is a commitment. I was thrilled to find a six pack of AVBC Imperial IPA.
From the AVBC website: “One look at Anderson Valley’s huge redwoods or imposing coastline cliffs, and it’s easy to see where the inspiration came for our Imperial IPA. This is one big beer.
The Imperial IPA was first created in honor of our second decade producing some of the finest beers in the world. This over-the-top brew is loaded with excessive amounts of malts to balance 20 separate additions of the finest Pacific Northwest hops to create what the late beer critic William Brand described as“The kind of beer that made California craft beer famous”.
As with all of our products, Anniversary Imperial IPA is never sterile filtered nor heat pasteurized.”

Aroma: A bit subdued, with a caramel malt front. Citrus and pine hops scents are there, but they are not overwhelming. 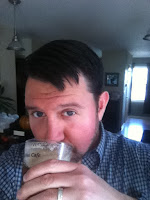 Overall: Perfect drinkability due to the exceptional balance. As far as Imperial IPAs go this is one of my favorites and since it isn’t as hoppy as some Imperial IPAs.  Be careful…at 8.7% ABV it’ll put you down if you don’t know when to put IT down. AVBC does it again (as if there was any doubt)!