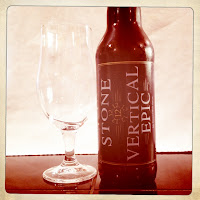 Commercial description: “As with any good epic, herein lies the promise of larger-than-life experiences, heroics, and twists and turns as the adventure unfolds. This bottle-conditioned ale is chapter eleven. Now is the time to enjoy it in a “vertical” tasting side by side with its ten Stone Vertical Epic Ale brethren! Each one unique to its year of release. Each with its own “twist & turn” in the plot line. Each one released one year, one month and one day from the previous year’s edition. This year’s Stone Vertical Epic Ale is the very last one. Yep, this is it. The final chapter. Or as they say on the last slide in some old films: “Fin.” No worries though: this edition is particularly well-suited for prolonging the experience, as it’s as cellarable as any in the series, or more. In this, the final edition, you can expect a perfectly balance *womp* of spices: cinnamon, ginger, allspice, sweet orange peel, clove (only a little!) and rosehips, all in the context of a dark Belgian style abbey-ish beer…but not as sweet. Dry even. Stone style. Thanks for coming on this Epic Stone-style journey with us! You can rest assured there will be new adventures to come…” 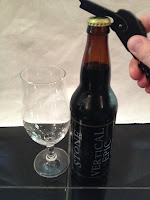 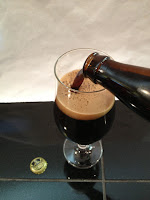 Appearance: Pours jet black with a dark brown frothy head and a bit of lacing. 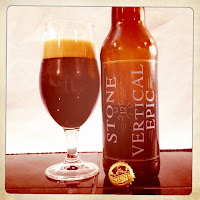 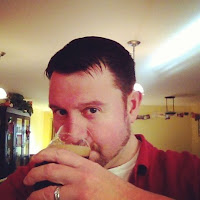 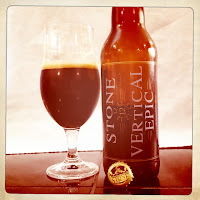 Overall: Complex with excellent balance, Stone Brewing Company Vertical Epic 12.12.12 is amazing.  At 9% ABV this beer is perfect for these colder months and definitely worth picking up.  I plan to buy a few for cellaring purposes.  This one IS epic!