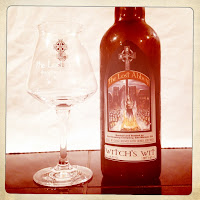 Tonight’s featured beer is The Lost Abbey Witch’s Wit Summer Wit Ale. Although I drank this beer and wrote my tasting notes a while ago I never did get around to getting the review posted and as I try to get “caught up” with my reviews I thought since we’re nearing summer (and this beer will once again be available) I should get this one up.

The artwork on the bottle has gotten a lot of scrutiny from the Wiccan Community so much of what The Lost Abbey writes about on their website is about the artwork.  You’ll read below.

From The Lost Abbey website: “When I imagined this beer, I thought of two perspectives that would make for the best story. The first story could have been told from the Point of View of our Witch (or Heroine depending on the story). Ultimately, I think I like not knowing her story is better. How she got there is a big part of the mystery.

I became more fixated on the guilt of the crowd. There would surely have been people (the faceless souls) who could have/ would have wanted to help. There also would have been some righteous people smug with satisfaction knowing another “witch” leaving their world.

The Point of View for this back story label is about that smugness and righteousness in light of a horrific atrocity against mankind. It’s written in a modified 3rd person Omniscient Point of View (partly a member of the crowd and my own voice). I knew that most people wouldn’t spend the time delving into the mystery of the piece I wrote but at the same time, I wanted a voice of reason (or counter reason) to be present for this beer. Specifically, we knew this to be a thought provoking original art piece.

The Story on the Label
Whether you’re a wonder healer, a caller of spirits or a lover of black magic, they will find you. And on that day, they will boil your blood, singe your skin and make a point to burn your soul to the ground. From that lonely stake, you’ll be left to contemplate your life of spell casting, obscure texts and a world operated between the shadows of night and day.

Convicted of a dark art, the crowd will gather to watch as they raze your earthen existence. An intolerable pain is the cross you’ll bear that day as you are removed from this righteous world. No one will summon the courage to save you in fear of their life. It sucks. But such is the life of a witch. In honor of your fleeting existence, we brewed Witch’s Wit. A light and refreshing wheat beer, it’s exactly the sort of thing you might expect to find being passed around the center of town on witch burning day. Say hello to the Prince of Darkness for us.” 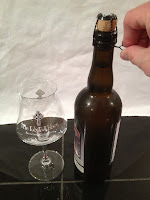 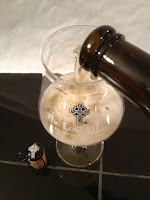 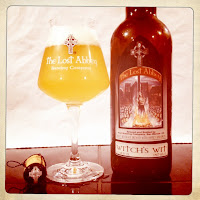 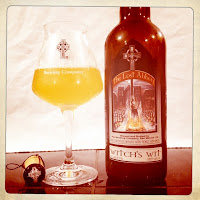 
If you haven’t already, please like the NorCal Beer Blog on Facebook (here)
Posted by Mark Harvey at 5:56 PM