Tonight’s featured beer is BridgePort Brewing Company Hop Czar Imperial IPA. One look at the label and I knew I had to try this one. I was very familiar with BridgePort IPA and I’ve enjoyed quite a few of ‘em so picking up this six pack was virtually risk free.

From the BridgePort Brewing Company website:” BridgePort Hop Czar, an Imperial IPA brewed from our award winning IPA recipe, first introduced to rave reviews in 2008. It is a triple-hopped bottle-conditioned, Imperial-style IPA that carries a deep malt background with enthusiastic citrus and floral notes paired with high hop bitterness. The newest in our permanent 6-pack line, the Hop Czar recipe blends copious amounts of Nugget, Chinook, Cascade and Centennial hops.” 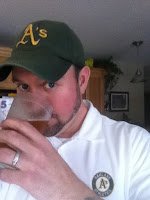 Taste: Fantastically balanced. Tastes like the aroma with citrus and a little spice and pine. Great hop flavor. Unlike the aroma there is a certain malt profile – caramel and biscuit that is very well done and enjoyable.

Overall: Not as malty as some others, this 7.5% ABV Imperial IPA is incredible.  I’ve enjoyed this beer so much that it has a permanent home in my beer fridge. I find myself picking up another six pack as soon as I drink the last. One can never have too many great Imperial IPAs on hand, right?