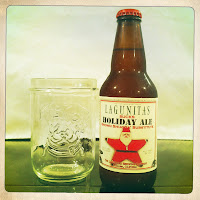 Appearance: Pours a golden amber with hardly any head and nice lacing.

Aroma: Huge pine and citrus hops with tropical fruits mixed in for good measure. Smells exactly as I would expect…perfect. 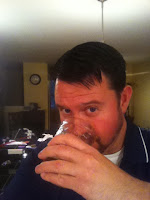 Overall: My angst about Brown Shugga’ begins to fade as I sip. After all the disappointment about a season without Brown Shugga’ Lagunitas Brewing Company Sucks Holiday Ale comes in and soothes my sadness with another extremely strong brew. At 7.85% ABV I have sessioned this beer (at home) and up to today have purchased probably three cases with certainly more to come (before it is no longer in stores).  Although I REALLY want my Brown Shugga’…next season I hope they brew this one too. I’m A BIG fan!!!
Cheers!
Mark Harvey
Posted by Mark Harvey at 5:42 PM