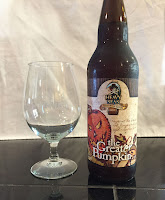 Tonight’s featured beer is Heavy Seas Beer The Greater Pumpkin - Imperial Ale brewed with Pumpkins and Spices aged in Bourbon Barrels. I picked this bottle up at Stella Brew (here) in Winston-Salem, NC. They have an excellent selection and we’re very helpful helping me pick out some local “must have” beers to bring home.  If you find yourself in the area stop in, buy some beverages and tell them that Mark from NorCal Beer Blog sent you!

From the Heavy Seas Beer website: “In the most worthy of pumpkin patches and during the silence of the midnight hour, the Great'er Pumpkin raises up and pours a rich deep and burnished orange color. Heady aromas of bourbon, cinnamon, ginger, allspice and clove linger seductively over the thick white head of this tremendous brew. Its love at first sip as the full malt body, dominated by British crystal malt, brown sugar and pumpkin, slowly washes over your tongue. Bourbon barrel aging rounds out the flavors with notes of oak, vanilla, and bourbon. Pairs well with crisp autumn weather, crunchy fallen leaves, and the knowledge that your kids will be asleep soon so you can raid their Halloween candy bags.” 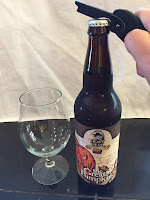 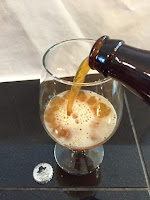 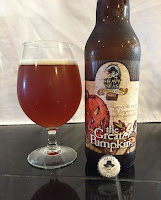 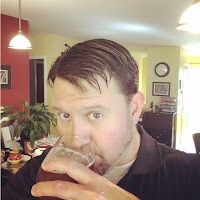 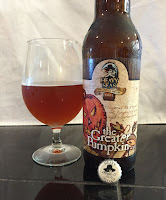 Overall: Warming and tasty, Heavy Seas Beer The Greater Pumpkin - Imperial Ale brewed with Pumpkins and Spices aged in Bourbon Barrels is certainly worth trying.  Not as much bourbon as other barrel aged beverages this 10% ABV offering is delicious.