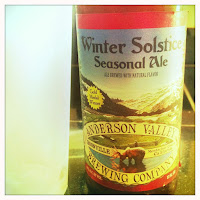 
Tonight's featured beer is Anderson Valley Brewing Company's Winter Solstice.  I have been a fan of Anderson Valley Brewing Company's beer for many, many years.  It started with their Boont Amber, a beer that is still a favorite of mine.  After years of enjoying their beers I took a trip to their old location at the The Buckhorn Saloon (before they moved to Boonville) with my buddy Brian (on the same camping trip that we visited North Coast on). Since then my wife and I have visited their Boonville location many times and I always enjoy spending some time there seeing what's on tap and enjoying their fantastic beers.

From the Anderson Valley Brewing Company's site: "From the first sip of Winter Solstice Seasonal Ale, your senses will be aroused with the vision of a glowing fire, warming the hearth and home, as gently drifting snow flakes silently blanket the trees outside. Each lingering sip will gently warm your soul with thoughts of family and friends, gathering around the table for the feast. Luscious, creamy, smooth, and warming, this medium bodied ale is brewed with Caramel and crystal malts to give it just a hint of sweetness, then paired with our private blend of holiday spice. Winter Solstice Ale is great alone or as an accompaniment to any meal, and it has been known to liven and spice up nearly any social event. This coveted and much sought-after brew is released in November, just in time for the holidays, and by the first of the New Year will be only a fond memory.
As with all of our products, Winter Solstice Seasonal Ale is never sterile filtered nor heat pasteurized, and should be stored in refrigeration. However, to fully enjoy its rich and complex flavor, it should be served between 40° and 45°F."

Appearance : Pours a reddish-brown color with a nice cream colored head. Some moderate lacing.  Active carbonation bubbling up from the bottom of the glass.

Aroma : The aroma is sweet and malty with a ginger/nutmeg/clove spice to it. Smells like candy and a little fruity. 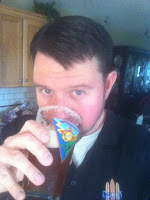 Taste : Flavorful and complex. Perfect balance between hops and malt. The malt sweetness of this beer is incredible with fruit flavors rushing in (I'm getting cherries, apples and plums). The spices are not prominent, more of a supporting role. Buttery smooth and not boozy at all.

Overall : I love this beer! Anderson Valley Brewing Company's Winter Solstice is one seasonal I always buy and keep on hand until their Summer release, Summer Solstice Cerveza Crema, comes out.  My wife prefers the Summer release, but I have yet to make up my mind which one I prefer.  At an ABV of 6.9%, AVBC's Winter Solstice can creep up on you (if having more than a few), but you'll never know it.  This beer is magic!