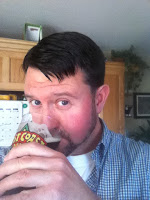 Taste: Raspberry up front, but it is balanced very nicely.  Toasted malts, molasses, with very nice chocolate and brown sugar at the finish.

Overall: Much like their Downtown Brown, Lost Coast Brewery’s Raspberry Brown Ale is extraordinarily drinkable and one that I could drink often.  Fruit ales aren’t ones I tend to session due to sweetness, but this one I could see having a couple of (even at 6.5% ABV).  With all that said, if you like brown ales and you’re looking for something that pairs wells with BBQ or dessert Lost Coast Brewery’s Raspberry Brown Ale is one to check out.
Cheers!
Mark Harvey
Posted by Mark Harvey at 11:41 AM