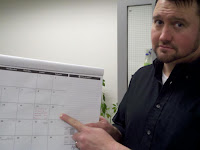 This is a late night post - a chronicle - of the most recent brewing (and bottling) escapades by yours truly and Brian Busch.

After brewing a Hoppy Red, "Lights Out Double IPA" and the "Heavy Mellow Stout" I decided it was time to brew a beer my wife would like (although I am fairly sure she'll like the stout once it is ready).  My wife is a big Hefeweizen fan so I thought I'd try my hand at making one.

I called ahead to the good folks at Hop Tech so they'd have "the goods" ready to go.  I've mentioned it before, but it bears repeating....Jade and Roberto over at Hop Tech are such good people and I cannot recommend their shop enough.  If you're thinking of brewing - go see 'em and tell 'em I sent you.

When I got there I was ready to roll, but I started thinking about the ABV of this one.  With the malt extract I got I was looking at around 4% ABV.  Many of the commercially available hefeweizens are around 5.5 so I asked Roberto to add another 1 1/2 pounds of malt extract in an effort to bump up the ABV - perhaps not quite high octane, but I like the name and I plan to tweak this one until I get the ABV up, up, up!

Around 7:00 pm on Saturday night Brian showed up to bottle the "Heavy Mellow Stout" and brew this next batch that I named "High Octane Hefe".

I boiled some water and stirred in the priming sugar - let that cool.  We added the sugar and water mixture to the bottling bucket and then moved the "Heavy Mellow Stout" out of the fermentation tank and into the bucket.  We let it settle so that we could have a cleaner end product.

Next we started the water for the "High Octane Hefe".

Once we reached 180 degrees we turned off the heat and added 8 pounds of liquid wheat malt extract. That was brought back up to boil.

Once we reached a nice rolling boil we added the hops (Mt. Hood Hops) and let that boil for 60 minutes.

Towards the end of the boil we added the Irish moss (to clarify).

We hooked up the wort chiller and began to bring the temperature down.

At that point we felt pretty good about the settling of the "Heavy Mellow Stout" so we began bottling.

We got our "production line" going.  This is serious stuff folks!

A bottle tree is a beautiful thing.  We're collecting as many stubby bottles as we can get our hands on.

It is amazing how nice it is to see cases of home brewed beer.

We checked the temperature of the "High Octane Hefe" and it was ready to head into the fermentation tank.  We pitched the Wyeast American Wheat yeast (1010) and then fanned in the wort to properly aerate it. 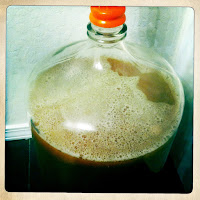 We moved the fermentation tank into a safe and secure bunker and now we wait.

After less than 24 hours we've got some serious action folks!

The plan is to bottle this one (fermentation willing) on Good Friday.