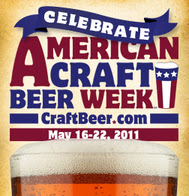 Just a quick post (and hopefully this one won't disappear like my previous brew review of Sierra Nevada's 2011 Bigfoot Barleywine - I write it again, but geez!).

This week is American Craft Brew Week - that's May 16th through the 22nd.

The history of American Craft beer week (from Craftbeer.com) says, "In 2006, the Brewers Association's American Beer Month, which was held in July, was changed into a weeklong effort in May; timed just before the busy summer beer season. Immediately, the week became the largest national effort focusing on American craft brewers, and remains so today. Since 2006, this national beer week has logged thousands of events and two U.S. Congress Resolutions have been passed supporting the goals and ideas of ACBW."


Now go visit Craftbeer.com and see what's going on in your neck of the woods and don't forget to celebrate AMERICAN CRAFT BREW WEEK!!!