Tonight’s featured beer is the 2011 Sierra Nevada Bigfoot Barleywine Style Ale. I had to rewrite this entry as Blogger lost my first attempt at this. I’ve changed how I blog – first putting it onto a Word document and then transferring as I can’t stand the thought of this happening again. So, here goes…I was introduced to Sierra Nevada Bigfoot by my sister-in-law and her husband. They live in Chico and are big Sierra Nevada fans. After years of knowing only their Pale Ale (and not being much of a fan) I was surprised to find that I REALLY enjoyed my first Bigfoot. So each year Bigfoot was released I’d buy a few six packs and enjoy them while they lasted. Around 2008 my brother-in-law told me about cellared Bigfoot that he had tried at the brewery and how fantastic it was. I am no stranger to cellaring beer and I understand that barleywines are particularly good after a few years. He told me that the good folks at Sierra Nevada broke open a five year old Bigfoot and it was incredible. So, starting in 2009 I began cellaring cases of Bigfoot. I guess we’ll see how good things can get starting in 2014 (I just hope the world doesn’t end).

From the Sierra Nevada website: “Our award-winning barleywine boasts a dense, fruity bouquet, an intense flavor palate and a deep reddish-brown color. Its big maltiness is superbly balanced by a wonderfully bittersweet hoppiness."

Aroma: Sweet, rich caramel malt with heavy duty citrus, pine and floral hop notes.  There is a faint aroma of alcohol which reminds me of a double IPA. 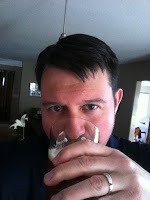 Taste: Taste as good as it smells.  Big caramel malt and hop flavor.  A higher hop profile than normal for a barleywine, but I love it.  Sweet, hoppy and a little earthy.

Overall: Each and every year Sierra Nevada Bigfoot doesn’t disappoint and 2011 is no exception.  A highly hopped barleywine for sure, but I like the fact that they put the hops in the driver’s seat and allow the malts to bring up the back.  With the high hop profile this beer is perfect year-round.  I don’t put this in the “only for winter” category.

At 9.6% ABV you may not want to drink six of these and attempt to stand.  I will continue to support this great beer from Sierra Nevada and I will never provide you with my address and you’ll know where to find cellared cases of this fine beer.
Cheers!
Mark Harvey
Posted by Mark Harvey at 8:36 PM