Tonight’s featured beer is Drake’s Brewing Denogginizer Double India Pale Ale. I was introduced to Drake’s back in 1999 while at the San Leandro Cherry Festival. Drake’s was pouring a Bing Cherry beer that I thought was incredible. Years later I began finding their beers at liquor stores and being poured at local brew pubs. I’ve always been a fan of their beers. The folks at Drake’s get GREAT beer.
From the Drake’s Brewing website: “Denogginizer Double India Pale Ale – 9.75% ABV, 90 IBUs.
Silver Medal winner for Imperial India Pale Ale, Great American Beer Festival 2009. Besides Jolly Roger, this is probably Drake’s most renowned beer. An Imperial (or Double) IPA, Denogginizer is a big bold beer hopped with an abundant amount of Simcoe and Amarillo with a touch of Ahtanum and Chinook. Mashed with Crystal malt and Caramalt for color and flavor to help balance out the hop assault. Denogginizer is also Drake’s most powerful regular offering, at a whopping 10% alcohol by volume!”

Appearance: Poured a golden orange with a tight khaki head and lots of lacing.

Aroma: A hop assault with lots of citrus and grapefruit notes. Pine resin and Simcoe scents. 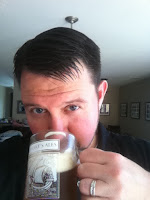 Taste: Wonderfully balanced with strong citrus notes. Not as sweet or malty as some double IPAs, but sweet enough to tame the hops.

Overall: This is a sneaky double IPA. At nearly 10% ABV you wouldn’t know it unless you decide to stand up and then…whoa… Tasty and not too boozy. I would put this one HIGH on my list of favorites.

I particularly like supporting Drake’s as a hometown brewery. They constantly get it right with all of their brews and Denogginizer is no exception!
Drake's has a monthly "First Friday" event.  From their website: "General Info: $5 per person voluntary donation, to the non-profit organization we are supporting, at the gate. (Children with their parents free). $15 for a Drake’s tasting glass and 3 tokens for 3 full pours. Additional tokens can be purchased separately ($3.50 each, with net proceeds going to the non-profit). Great food available for purchase. Please park in the main West Gate Center lot, in front of Walmart & Sports Authority, and walk back to the brewery. There is no parking at the brewery. Eight (or more!) Drake’s Beers will be available, including our present seasonal (when available). 21 and over please, except children with their parents. Please, leave your pets at home. And kindly respect our neighbors and their customers in the West Gate Center. OK to use Drake’s tasting glasses from previous Friday events. Other glassware not accepted."
I'd like to get a group of us locals together to head over to Drake's on one of these "First Friday" events.  Comment and let's get over there!
Cheers!