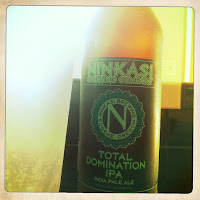 This early morning post is coming to you from Denver, CO. I’m stuck at the airport – no hotel room and I am taking my buddy Rob’s advice and beerlogging as I am not sure I’ll be able to sleep on the provided chairs (and with all the lights and people milling around). Of course the free wi-fi isn't completely cooperating so I guess we will see when this actually gets posted. The featured beer today is Ninkasi Brewing Company Total Domination IPA. My buddy Tony turned me onto Ninkasi beers and I’ve become a big fan of their brews. I lived in Eugene, OR for a year as a kid and I don’t think I returned to California with my heart. There’s just something about Oregon and Washington that seem “right” to me and there’s no lack of fantastic beers. I’ll review other Ninkasi beers, but today is for Total Domination!
From the Ninkasi Brewing Company Website: “Multiple hops collide in balanced perfection, dominating the senses, achieving total satisfaction. From the Pacific Northwest, birthplace of the modern IPA comes a beer whose name says it all. 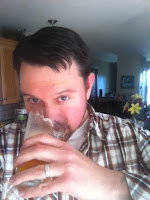 Overall: A tasty brew that stacks up with some of my favorites. At 6.7% ABV this is definitely an IPA worth checking out (if you haven’t already).

I had a chance to have one of these fine beers while visiting Seattle (at the Mariners game). Very nice to get a chance to try this one on tap (bottles are good, but the tap is where it is at!).