Tonight’s featured beer is Dogfish Head Craft Brewery’s Festina Peche. I like to “beer shop” and tend to purchase nearly every beer Dogfish Head brews. When I saw Festina Peche I was a little reluctant (low ABV and high price), but I thought what the heck…I’ll pick up a four pack for the sake of trying and possibly reviewing.

From the Dogfish Head Craft Brewery website:” A refreshing neo-Berliner Weisse fermented with honest-to-goodness peaches to (get this!) 4.5% ABV! Because extreme beers don't have to be extremely boozy! Available in 4-pack and draft during the sweaty months.

Sadly, there are only a few breweries left in Berlin still brewing the Berliner Weisse style which is characterized by its intense tartness (some say sour). There were once over 70 breweries in Berlin alone making this beer! In addition to fermentation with an ale yeast, Berliner Weisse is traditionally fermented with lactic cultures to produce its acidic or green apple-like character. It is delicately hopped with a pale straw color and served as an aperitif or summertime quencher. To soften the intense sourness, Berliner Weisse is traditionally served with a dash of essence of woodruff or raspberry syrup.

In our Festina Peche since the natural peach sugars are eaten by the yeast, the fruit complexity is woven into both the aroma and the taste of the beer so there is no need to doctor it with woodruff or raspberry syrup - open and enjoy!”

Aroma: Light peach aroma mixed with wheat and yeast and a touch of lemon. Very pleasant. 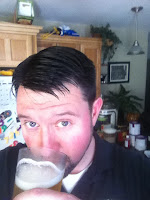 Overall: Incredibly drinkable and light bodied, at 4.5% ABV Dogfish Head Craft Brewery’s Festina Peche is a very sessionable beer. Perfect Summer beer…get some before it is all over and risk waiting for next year!