Tonight’s featured beer is Lost Coast Brewery 8-Ball Stout. I have long enjoyed a good stout and lucky for me Lost Coast brews a GREAT stout. Since I've reviewed several of their offerings I thought perhaps a little Lost Coast history lesson was in order (thanks Wikipedia) "Lost Coast Brewery is a rare instance of a female-owned microbrewery breaking into the male dominated microbrew world. Groom, a pharmacist, and Pound, a family counselor, began experimenting with the idea of starting their own pub in 1986. Following years of planning, home brewing, and visiting pubs in England and Wales, Groom and Pound purchased the Pythian Castle in 1989. The building went under restoration to house the pub and cafe after being purchased from the original owners, the Fraternal Order of the Knights of Pythias. Lost Coast Brewery pub and cafe is family owned and operated and has been open for business since July 1990. The brewery outgrew its origins in Pythian's Castle and moved to a larger building further down Highway 101 in 2005. As the 46th largest brewery in the US, Lost Coast Brewery is expected to produce 30,000 barrels despite only distributing in 19 states".
From the Lost Coast Brewery website: “Not for the faint hearted! Our stout rewards the palate with robust flavor of roasted malts (malts are roasted like coffee beans) and heavy hops. A creamy smooth surprise.”

Aroma: Chocolate, roasted malts and coffee with the smallest hint of hops. It smells incredible! 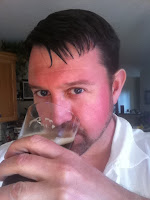 Taste: Tastes like it smells with chocolate taking a predominant role followed by roasted malts and coffee. Finishes with a touch of hop bitterness. Such a well crafted beer!