Tonight’s featured beer is Lagunitas IPA. It had been quite some time since I had ventured into a six pack of Lagunitas IPA. I typically pass up their standard IPA for one of their other offerings, but thought I should pick up another six and review it. I’m glad I did.

From the Lagunitas website: “India Pale Ale - Thanks for choosing to spend the next few minutes with this special homicidally hoppy ale. Savor the moment as the raging hop character engages the imperial qualities of the Malt foundation in mortal combat on the battlefield of your palate! This is our unique version of an ancient style. A style as old as the ocean trade routes of the last centuries Great Ships. Not as old as the equator they had to cross twice enroute, nor as old as the 10,000 or so miles of Di-Hydrogen Oxide and Sodium upon which they sailed, but older than the Circulithium-4 Lentloid that binds the Lupulin Quartnate onto your taste buds. Weird. Think about it. Now stop. OK, go again, now stop. Think again, and stop. But we digress. Made with 43 different hops and 65 various malts, this redolent ale will likely float your boat, whatever planet you're on.

Thanks for your trust, and as always: Think Globally, Drink Locally!!”

Aroma: Hop centric with floral, pine and citrus scents. Malt brings up the back. 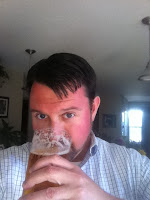 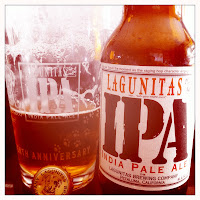 Overall: Crisp and clean, not too bitter and not too sweet, Lagunitas IPA is a well balanced and at 6.2% ABV it is easy to knock a few back without being knocked (completely) back.