Tonight’s featured beer is Uinta Brewing Company Punk’n Harvest Pumpkin Ale. In keeping with a fall or Halloween theme I plan to review all of the pumpkin beers I can get my hands on. I’ve been trolling the local stores in search of new pumpkin beers and low and behold I found Uinta’s. Last time I was in Utah I failed to visit them (made it to Squatters Brewery, Wasatch Brew Pub and Brewery, Desert Edge Brewery and Red Rock Brewing Company) so I was happy to find a six pack of their seasonal to give it a try.

From the Uinta Brewing Company website:” Harvest the flavors of fall with a bottle opener and a stroll down the craft-brewed beer aisle. Four+ Punk’n Ale is the pick of the crop with notes of roasted pumpkin and seasonal spices. Savory. Crisp. The sweetness is in the celebration, not on the palate.

Malt and hops accented with roasted pumpkin and spices of the season. A subtle hint of vanilla and honey. Punk'n is a wonderful compliment to foods with nutmeg, cinnamon, and clove flavors. Try it with roasted turkey, squash or pumpkin ravioli, peach cobbler, or pumpkin cheesecake.”

Appearance: Pours a reddish copper with a small white head and good lacing. 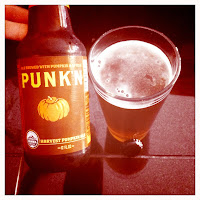 Aroma: Pumpkin and pumpkin spice. Cinnamon and nutmeg are up front followed by allspice. 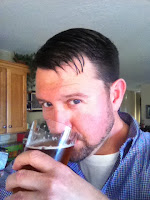 Overall: Well balanced and really low ABV (4% ABV) make this beer an incredibly easy beer to session. It may not be my first choice of pumpkin beers, but it is certainly worth trying and keeping around this time of year.