Tonight’s featured beer is Dogfish Head Craft Brewery Punkin Ale. In keeping with a fall or Halloween theme I plan to review all of the pumpkin beers I can get my hands on. Dogfish Head’s Punkin Ale is one of my seasonal favorites and I typically purchase a few four packs each season.

From the Dogfish Head Craft Brewery website: “A full-bodied brown ale with smooth hints of pumpkin and brown sugar. We brew our Punkin Ale with pumpkin meat, organic brown sugar and spices. This is the perfect beer to warm-up with, as the season cools. 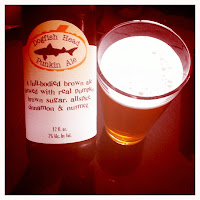 Punkin Ale is named after a locally-famous and seriously off-centered event here in southern Delaware - Punkin Chunkin (check out some of these Discovery Channel videos of Punkin Chunkin, you gotta see it to believe it!). In fact, Punkin Ale made it's debut as it claimed First Prize in the 1994 Punkin Chunkin Recipe Contest - yes, that was a full 6 months before we even opened our doors for business. Punkin Chunkin has grown in size and scale with pumpkins now being hurled more than 4,000 feet through the air! If you come down to see if for yourself - come by and visit us.
Since then, we've brewed Punkin Ale each and every fall. It is released right around September first each year. When you find it, grab some extra because it's usually gone by Thanksgiving.”

Every Beer Has A Story - here's Punkin Ale:

Appearance: Pours a brownish orange with a nice white head and decent lacing.

Aroma: Pumpkin, brown sugar, nutmeg, allspice and cinnamon (of course, it is written on the label, but there’s no false advertising here). Smells like a pumpkin pie – so delicious! 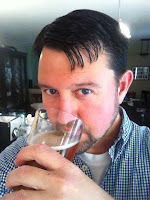 Taste: Like eating pumpkin pie with an excellent brown ale chaser. Caramel malts, nutmeg, cinnamon, allspice, brown sugar and a touch of alcohol. Tastes as good as it smells!