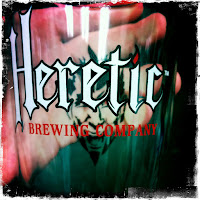 Tonight’s featured beers are Heretic Brewing Company Evil Cousin Imperial IPA and Evil Twin Blood Red West Coast Amber. When I heard that Heretic was planning to have their first pint night (ever) at Handles Gastropub in Pleasanton, CA I knew I had to get over there since I had yet to try the beer. Little did I know that I was going to see my good friends from HopTech Homebrewing Supplies (Jade and Roberto), see Mike McDole again and say “Hello” to Jamil Zainasheff, Chief Heretic at Heretic Brewing Company. I needed to pick up a Heretic pint glass for the collection (much to my wife’s chagrin).

From the Heretic Brewing Company Website: “Evil Cousin is Heretic's take on a West coast imperial IPA. This beer is a bold, in-your-face hop monster. It has a light, easy drinking malt character that allows the hops to stand out. The hop character in this beer is intentionally on the dank side; big, sticky, and aggressive. This beer is for those of you who can't get enough hops. Join us on the dank side.” 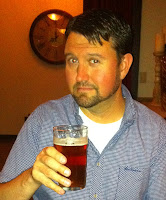 Overall: Well balanced, extremely drinkable and at 8% ABV a beer I could drink this for a little while. I look forward to seeing this all over the place and hopefully someday in bottles. A VERY solid beer!

Appearance: Pours a very dark amber with a nice off-white and thick head and excellent lacing. 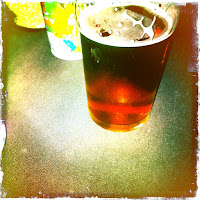 After these two I wanted to try Tafelbully, Heretic’s Belgian-inspired table beer, but my wife needed me to finish her Maui Brewing Company CoCoNut Porter so I had to hold back. Most certainly next time.

If you have a chance to check out Heretic Brewing Company’s offerings, DO!