Tonight’s featured beer is Rogue Ales Dead Guy Ale. Since we’re cruising through the month of October I waited until now to review this beer. I’ve been digging up as many “Halloween themed” beers as I can get my hands on…some I’m avoiding, while others I’m just jumping in whole heartedly. Dead Guy Ale has been a beer I’ve enjoyed for some time now and so I figured it was high time I put out my review of this stellar drink. I also blogged about the Rogue Ale’s John John Dead Guy Ale I tried while in Alabama (here).

From the Rogue Ale website:” In the style of a German Maibock, using our proprietary Pacman ale yeast. Deep honey in color with a malty aroma and a rich hearty flavor. In the early 1990s Dead Guy Ale was created as a private tap sticker to celebrate the Mayan Day of the Dead (November 1st, All Souls Day) for Casa U Betcha in Portland, Oregon. The Dead Guy design proved so popular with consumers and especially Grateful Dead fans, that we made it the label for our Maierbock ale. Even though the association with the Grateful Dead band is pure coincidence, we have gratefully dedicated Dead Guy Ale to the Rogue in each of us.” 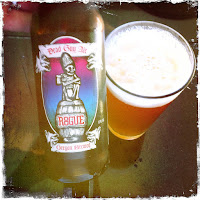 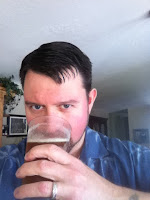 Overall: Rogue Ales Dead Guy Ale is incredible, extremely drinkable and at 6.6% ABV one can have a few of these without worrying about becoming a dead guy. Pick some up for Halloween...you'll be glad you did.