Tonight’s featured beer is Shock Top Pumpkin Wheat. I don’t often purchase commercial beer and in this case, I didn’t. I was given this bottle particularly for review. When I stare at the shelves at the local liquor store, grocery store or BevMo I think long and hard before I pick up any commercial beer and pumpkin beers are always the hardest ones to resist. Will it taste good? Will I be stuck with five beers that no one will drink? Well…let’s check this one out…

From the Shock Top Beer website:”Shock Top Pumpkin Wheat is the first seasonal ale from Shock Top. With a flavor that’s refreshingly fall and distinctly Shock Top, it’s guaranteed not to be the last. Shock Top Pumpkin Wheat is a traditional Belgian-style wheat ale brewed with ripe pumpkins and a variety of autumnal spices, including nutmeg, cinnamon and cloves. This seasonal unfiltered wheat ale has a deep amber color and is crafted with a refreshingly distinct pumpkin spice that fully captures all the flavors of fall.”

Appearance: Pours an opaque and cloudy burnt orange color with a decent off-white head and lacing. 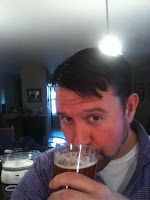 Overall: Fairly well balanced and drinkable. I may not run out and buy a six pack of Shock Top Pumpkin Wheat, but I wouldn’t turn one down at a party. At 5.2% ABV I could cozy up to a few of these on Halloween night and not be disappointed and for someone on a budget it is a pretty decent pumpkin beer to have around.