Hello beer lovers and welcome to another edition of the NorCal Beer Blog's travelling beer reviews.
In September I had a chance to visit Chicago (I’m just getting around to writing up my travelling beer reviews) and I was told that I had to try some Goose Island Brewing Company beers and although I learned that a major stake in the brewery had been acquired by Anheuser-Busch I had heard that the beers they serve at their Clybourn location (Chicago’s Original Brewpub) were pretty fantastic. 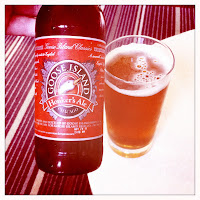 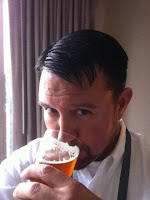 Taste: Like the aroma with just the right hop and malt balance.

Overall: At 4.2% ABV this is a highly sessionable and enjoyable offering.  So far so good with their beers.  I was ready to for seconds (which I had) and then to try other offerings (which I did).

As I’ve mentioned in previous posts, it is very common when I travel that I convince my travelling companions to visit a brew pub, brewery or bar of some sort and this trip was no exception.  After doing my research I learned that we should visit Goose Island Brewing Company’s Clybourn location to get some of their more specialty offerings.

I started with a Goose Island Brewing Company Broad Shoulders Barleywine (8.7% ABV).  Poured a caramel color with a small head leaving a very small amount of lacing.  Aroma was sweet toffee, toasted and caramel malts, dark fruits and hops.  Tasted fantastic – surprisingly hoppy, toffee, sweet and delicious.  A very enjoyable beer and one that I’d be happy to have poured for me again and again.

Next up for me was a Goose Island Brewing Company Pere Jacques Belgian Style Abbey Ale (8% ABV).  Poured a dark amber with minimal head and nice lacing. Aroma was sweet and strong with dark sugar, malt, hints of cinnamon, Belgian yeast and dried fruit. Flavors were sweet and complex. Sweet caramel, dark fruits, hearty biscuit and mild Belgian spice. Another incredible beer and one that I’d love to experience again.

I was told by a good friend of mine that I couldn’t leave Chicago without having a Goose Island Brewing Company 312 Urban Wheat Ale (4.2% ABV) so on my final day I had one at Tavern at the Park. Poured a light straw color with a very small head and little lacing. Aroma was of slightly roasted malt, sweet wheat and spicy hops. Tasted like a wheat beer should taste with citrus overtones, wheat flavor, and spice notes.  Overall it was an easy to drink beer that I wouldn’t mind drinking on a hot summer day.