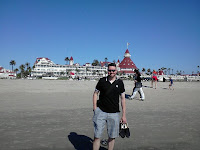 Hello beer lovers and welcome to another edition of the NorCal Beer Blog's travelling beer reviews.
Recently I visited San Diego with my wife and got a chance to drink up some local beers.  There were more breweries and beers than I could get to on this visit, but I am certain I’ll be back. San Diego has a rich brewing history (read about it) and I was eager to drink in the sun and the brews while there.
First stop once we were off the plane was some lunch and beers at Yard House in San Diego’s Gaslamp District (here).  Yard House always has good food and great beers on tap.

My wife started with a Lost Coast Brewing Company Apricot Wheat (5% ABV).  Lost Coast is one of her favorite breweries and they consistently turn out great beers. Poured an apricot gold color with a small off-white head and nice lacing. Aroma was heavy on apricots with wheat and malt notes as well. Tasted fantastic – sweet apricot and malt and those flavored lingered.  Overall a very nice offering from Lost Coast Brewing Company…my wife wishes they would bottle it.

I started with a Stone 15th Anniversary Escondidian Imperial Black IPA (10.5% ABV) and it was fantastic.  Poured a deep dark black with a nice head and nice lacing.  Aroma was hoppy, roasty and earthy.  Tasted malty sweet, caramel, toffee, butterscotch and a little vanilla with a nice pine hop profile. Overall opinion of this beer is fantastic.  So glad I had a chance to try it on tap.  I have a few bottles of this at home and can’t wait to crack ‘em open.

My second beer came on the recommendation of our waiter.  I asked him about local beers and asked if there were any available that were not on the menu.  He suggested a Coronado Brewing Company Idiot IPA (8.5% ABV).  Poured a medium gold with a tight head. Medium lacing. Aroma was hop centric with grapefruit and pine. Tasted fantastic with a caramel malt base and huge flavors of tropical fruits, pine, citrus, and grapefruit.  At that point I knew I needed to go visit Coronado Brewing Company.

The next day we ventured all over San Diego and made it over to Coronado to check out the Hotel del Coronado. On our return across the island we stumbled upon the Coronado Brewing Company (here) so we decided to head in and try some of their beers. We started with their sampler which had Mermaid's Red, Island IPA, Coronado Golden, Orange Ave Whit and Frog's Breath IPA.  Since they were out of the Idiot IPA I thought I’d go with a pint of their Frog’s Breath IPA. 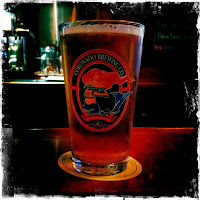 Coronado Brewing Company Frog’s Breath IPA (6.4% ABV) poured a hazy orange body with a small head and nice lacing.  Aroma was orange, grapefruit, pine and floral notes.  Tasted very good – much like the aroma with the addition of some bready pale malt. Overall very enjoyable and drinkable. After polishing off the samplers and the pint Charlotte the bartender offered some tastes of their Oktoberfest and Blue Bridge Coffee Stout.  Both were outstanding, but the Blue Bridge Coffee Stout was simply amazing. If you’re on Coronado you’ve got to get over to the Coronado Brewing Company.

The following day we headed over to La Jolla and to George’s at the Cove’s Ocean Terrace (here).  I asked our waiter Brian what he recommended and he suggested I try a pint of Ballast Point Brewing Company Sculpin IPA (7% ABV). Brian knows his beer and it is always refreshing talking beer with folks who enjoy and appreciate beer.  Brian was right; the Ballast Point Brewing Company Sculpin IPA was excellent. Poured crystal clear orange amber with a fluffy white head and excellent lacing.  The aroma was of grapefruit and pine. It tasted incredible crisp and fresh with citrus and pine and just a touch of malt sweetness.  Incredible balance and one of the best West Coast IPAs I’ve ever had. Check out all the great beers Ballast Point Brewing Company brews here.

Later that afternoon (and before dinner) I wanted to stop over at The Lost Abbey/Port Brewing Company (here) to grab a beer and perhaps a shirt.  I did both and when asking the bartender there what he’d recommend he suggested a Lost Abbey Judgment Day Belgian Dark Quad styled Ale (10.5% ABV).  This is a MASSIVE beer.  It poured a dark brown with a nice head and nice lacing. Aroma was of raisins, biscuits, chocolate and caramel.  It tasted sweet with caramel, chocolate, vanilla, raisins, and candi sugar.  Liquid Heaven.  Overall I highly recommend this beer and I have a couple bottles at home to drink (and review “officially”).
Our next stop was for dinner and beers at Stone Brewing World Bistro and Gardens (here).  This was an incredible place.  Walking up the path we felt like we were heading into some sort of Disney attraction. The inside was gorgeous and probably one of the best examples of a brewery/restaurant I’ve ever seen.  After picking up a shirt at the store we were seated and ordered a couple of beers.

My wife ordered the Bruery / Elysian / Stone La Citrueille Céleste de Citracado (5% ABV).  It poured a dark mahogany with a decent white head and nice lacing.  The aroma was of caramel, pumpkin or yam, and spice.  It tasted incredible - perfectly spiced with pumpkin, yams, brown sugar, toffee, cinnamon, raisins and slight roasted nutty malt. Overall I thought this beer was incredible and I’ve been trying to find it at every bottle shop I visit (I think I may be out of luck).

I ordered a Double Bastard Ale (10.5% ABV) to go along with my fantastic duck tacos (served with their Double Bastard Ale Hot Sauce). The Double Bastard Ale poured a dark reddish brown with a nice head and sticky lacing.  Incredible aroma with pineapple, roasted caramel malt, hops resins, orange rind and alcohol.  The taste was like liquid magic – smooth, incredible balance, malts galore and a nice hop bitterness that makes this one of the best beers I’ve had.  Overall amazing and I picked up six bottles of it immediately when I returned home.

Our meals, beers, ambiance and everything about that night were as close to perfect as it could be.  If you are anywhere near Stone Brewing Company you MUST go.  YOU MUST!

On our final day in San Diego was ran around finishing up some souvenir purchasing and made it over to Greek Islands Café in the Seaport Village.  They had their own beer made by Ballast Point Brewing Company called Greek Island's Amber (5.5% ABV).  I can only guess that it is really Ballast Point’s Calico Amber Ale renamed for the restaurant.  Poured a clear copper with a nice head.  Aroma was of floral hops with sweet malt, caramel malt, biscuit, toasted sugar and candied dates. Taste just like the aroma with a lingering malt sweetness that keeps going on and on.  Overall a beer well worth trying. 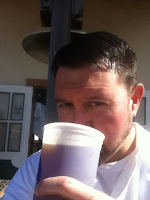 Well, that was my trip to San Diego.  We had a fantastic time, got to try some new beers, good food and relax.  Next time I head down to San Diego I have a list of places I want to go to.
Where’s your favorite place in San Diego?
Cheers!
Mark Harvey
Posted by Mark Harvey at 7:53 PM