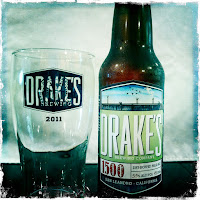 Hello beer lovers and welcome to another edition of the NorCal Beer Blog's brew review.
Tonight’s featured beer is Drake’s Brewing 1500 Pale Ale.  I hadn’t tried 1500 until I worked the Drake’s first Friday for my kid’s school (previous post). Tony (from Drake’s) suggested I try this (as well as Alpha Session) and I became an immediate fan.  I’ve been back to the Barrel House (here) a few times and I keep picking up 1500. I think I may need to stop by again soon…I think I only have one left.
From the Drake’s Brewing website : “An American Pale Ale. For batch number 1500, Josh & Brian decided to brew a big hoppy beer, yet make it quaffable by keeping the alcohol level down. Turns out everyone liked it so much, that it is now brewed year-round. Loads of Simcoe and Amarillo hops are blended in the fermenter, just after fermentation has finished, to impart a huge aroma of pine and citrus.”
Winner: Silver 2008 Great American Beer Festival and 2nd Place American Pale Ale 2008 California State Fair. 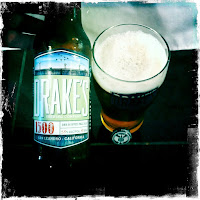 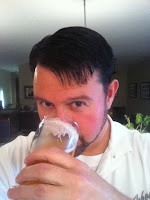 Taste: Nothing short of amazing with LOTS of hop character (citrus and pine) and a fantastic malt backbone. 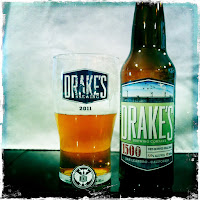 Overall: Well balanced and sessionable (at 5.5% ABV). Drake’s Brewing 1500 Pale Ale has quickly become one of my favorite beers. Impressed would under emphasize how I feel about this one. GREAT BEER – DRINK IT!
Cheers!
Mark Harvey
Posted by Mark Harvey at 6:57 PM