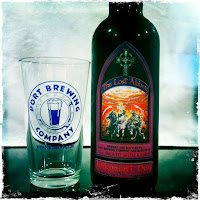 From The Lost Abbey website:” A massive beer in every sense of the word. A stronger and more contemplative version of our Lost and Found Ale. Judgment Day is the base beer for our Cuvee de Tomme. Many of the Trappist Breweries produce a version of beer which ages incredibly well for many years to come. And, since none of us knows when the end of the world is coming, we suggest you stock up with lots of Lost Abbey beers so that when the end of the world magically appears from no where, you’ll have a beer or two on hand for even the stingiest of angels. Available in 750ml bottles and on draft at select inspired locations.”

Appearance: It poured a dark brown with a nice head and nice lacing. 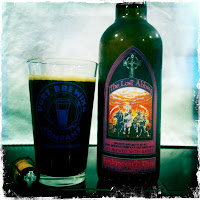 Aroma: Aroma is of raisins, biscuits, chocolate and caramel. 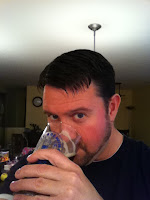 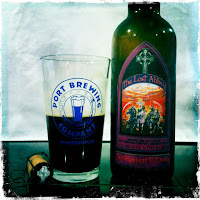 Overall: Liquid Heaven.  Overall I highly recommend this beer. I’m going to see about aging a few bottles…if I can stand the wait. At 10.5% ABV one 22 might be enough…but is there EVER enough?
Cheers!
Mark Harvey
Posted by Mark Harvey at 7:29 PM