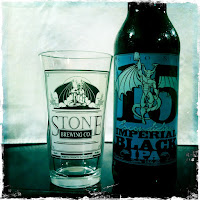 Hello beer lovers and welcome to another edition of the NorCal Beer Blog's brew review.
Tonight’s featured beer is Stone Brewing Company 15th Anniversary Escondidian Imperial Black IPA.  I had an opportunity to try this on tap at Yard House when I was in San Diego and since it was SO good I figured I should pick some up and review it (officially).

(Stone Brewing Company 15th Anniversary Escondidian Imperial Black IPA from Yard House in San Diego pictured left)
From the Stone Brewing Company website:” In the 15 years since we entered the craft brewing world, change has come not in a straight line, but as an exponential curve. The craft brewing movement has long been called a "revolution." But today the air is so thick with revolution, it's palpable. No longer is it only an awareness among the faithful; the unconverted are beginning to feel it as well. Denial and ignorance are disappearing in favor of opened eyes, curiosity and the sense that there's something larger out there. For far too long we have been lied to. For far too long we have been oppressed by the notion that dumbed-down-lowest-common-denominator-mediocrity was all that we could, and should, expect. You might think we're talking only about the world of brewing, but we're not. There is a myriad of products out there masquerading as cheeses, coffee, chocolates, breads...hell, there is stuff pretending to be 'food' that our great grandmothers would not recognize as such. Yet the craft brewing movement, together with the artisanal food movement, is making much progress. Where the industrial companies can't dismiss or bury us, they are attempting to copy us with cheap facsimiles. Yes, chances are if you are holding this bottle, you understand these things to be true about the world of brewing. You also likely understand the importance of our fight at Stone against accepted 'norms' over the last 15 years. We believed that America was ready to embrace things made with artistry and passion. You have spoken. Your response has been clear. We are not merely consumers to be spoon-fed whatever commodities need to be unloaded for a profit. We have only just begun to move the needle of this revolution, & mediocrity still reigns. Consider that when you reject dumbed down, industrialized food and drink, you also support craft brewing. The line is nearly seamless; we are fighting the same battle. We will not win in our lifetime, as the powers are too entrenched, and the masses tooâ€¦fooled. And shackled. However, this is a revolution of ideas and of taste, and we will win. How do you want to be viewed by your children, and your children's children? As a hero, or as the oppressed? (Those that don't think they have been oppressed are already lost.) Ultimately, it's up to you to decide. We hope you'll stand with us. Strong and unyielding. You are needed. This bottle and its glorious contents are a celebration of you, brothers and sisters, and your importance in this fight. Cheers to all we've accomplished together in the past fifteen years, and cheers to the adventure ahead! “ 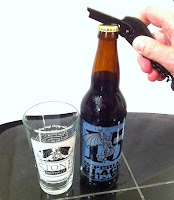 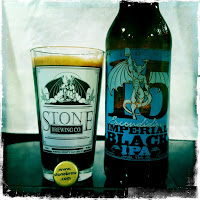 Overall: 10.5% ABV and fantastic.  Black IPA perfected! Glad I had a chance to try it on tap and happy that I have a few more of these stashed for my future drinking enjoyment.
Cheers!
Mark Harvey
Posted by Mark Harvey at 6:32 PM