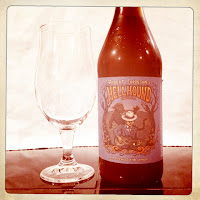 Tonight’s featured beer is Dogfish Head Craft Brewery Robert Johnson's Hellhound on my Ale. In an attempt to get caught up with beers I drank a while ago, took notes on, but never “officially” posted the review I’m going to try and get up to date…starting with this review.

From the Dogfish Head Craft Brewery website: "2011 would have marked the 100th birthday of Mississippi Delta bluesman Robert Johnson, who according to legend, sold his soul down at the crossroads in a midnight bargain and changed music forever.

Working again with our friends at Sony Legacy (yup, the same folks we did our Miles Davis-inspired Bitches Brew with), Dogfish Head paid tribute to this blues legend by gettin' the hellhounds off his trail and into this finely-crafted ale.

Hellhound is a super-hoppy ale that hits 100 IBUs in the brewhouse and 10% ABV. It's dry-hopped with 100% Centennial hops at a rate of 100 kilos per 100 barrel brew-length. Can you tell we're stoked for this mighty musical centennial?

To accentuate and magnify the citrusy notes of the Centennial hops (and as a shoutout to Robert Johnson's mentor Blind Lemon Jefferson), we add dried lemon peel and flesh to the whirlpool." 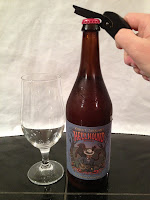 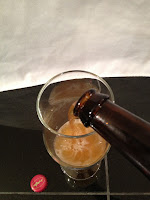 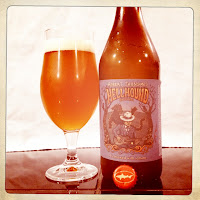 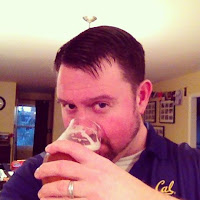 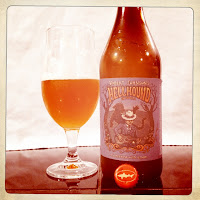 Overall: Being a fan of Robert Johnson it made a lot of sense to me to pick up Dogfish Head Craft Brewery Robert Johnson's Hellhound on my Ale.  At 10% ABV this big beer isn’t boozy, but does have a slight alcohol presence.  Not sure I’d drink it again, but I did enjoy it while it lasted.

Mark Harvey
If you haven’t already, please like the NorCal Beer Blog on Facebook (here)
Posted by Mark Harvey at 6:15 PM