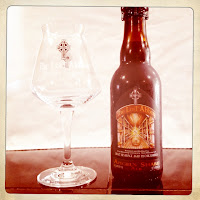 Tonight’s featured beer is The Lost Abbey The Angel's Share Ale Bourbon barrel-aged English Style Barleywine. I found this bottle at Artisan Wine Depot (here) located in Mountain View.  At the time I picked up I hadn’t noticed a price tag on it…turned out to cost $17.04 for a 375 ml.  A little steep, but since I hadn’t reviewed it and I am a sucker for Bourbon barrel-aged anything I thought I’d keep it.  Glad I did!

From The Lost Abbey website: “Down in Kentucky and across the pond in Scotland, distillers who age their whiskeys for many years refer to the evaporation of the spirits from their barrels as “The Angel’s Share.” We couldn’t agree more. Each time a barrel is filled, a measure of liquid seeps into the oak and is lost for good.

This striking Strong Ale is brewed with copious amounts of Caramel malt to emphasize the vanilla and oak flavors found in freshly emptied bourbon or brandy barrels. The beer spends a year in oak before it is packaged for release. The beer is 12.5% ABV and is available in 375ml and 750ml bottles and on draft at inspired locations.

It’s warehouse #5 built in 1886 that gets the most attention. The other four weren’t built so well and succumbed over the years. On the outside, to most #5 is a rather unremarkable white washed building. That is until they pass through the weathered doors and are easily consumed. Here in the hallowed halls it just oozes history. Inside this three story building, they find row after row of whiskey slumbering away the days until the distiller calls their name and they are called into action.

It’s a weathered building with a timeline of over one hundred and twenty years of continuous service. Looking around, there is a warm orange glow from all the wood inside. On both sides of the room for as far as your eyes can see, there are wood racks with carvings, nicks and dings. It smells sweet in here. Could that be the Whiskey breathing? Perhaps it’s the angels doing their work? Or is there just something sweet about 200 year old wood that intoxicates your sense of smell.

Imagine the history that belongs to the wood in this “shed.” It comes from seeds that were planted when the idea for the Revolutionary War was just fermenting. And it’s still here, every single day telling the story of this distillery. This warehouse has seen it all. It survived the harsh winter of 1913. There was the Tornado in 1956 and who can forget the flood of 1973? But, it’s still here. Still working, living and breathing whiskey as great grandpa designed it to do.

Sure, there are more cobwebs and spiders than there used to be? It’s an old building after all. One of the family members proclaimed it to be a grand old warehouse of monumental importance, so now it’s on the National Registry of Historic Buildings. Yet, the premise has always been the same. We need a place to age those spirits. And #5 has always been there.

Ask the family members to describe #5 and they all tell you the same thing. “The Angel’s get more than their fair share from #5 but we don’t care. To us, there is nothing finer than the whiskey that comes from old #5. We wish they drank less. But then again, we really don’t need an excuse to drink more?”

Way down in Kentucky and across the pond in Scotland, distillers age their whiskeys for many years in oak barrels. Over time, some whiskey is lost to evaporation. They refer to this loss of spirits as “The Angel’s Share.” Each time a barrel is filled, a measure of this liquid seeps into the oak and is lost forever.

Our Angel’s Share is a barrel aged burgundy colored ale infused with copious amounts of dark caramel malt to emphasize the vanilla and oak flavors found in freshly emptied bourbon or brandy barrels. Each batch spends no less than 12 months aging in the oak. As with all of our beers, this beer is brewed for sinners and saints alike. So be an angel and share it with a friend or two.” 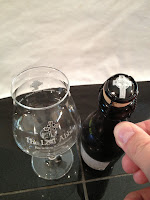 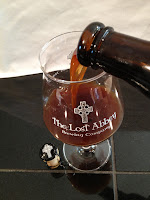 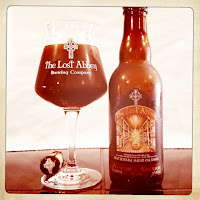 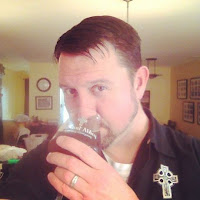 Taste: Bourbon dominates with caramel and toasted malt, toffee, vanilla, dates, fig, molasses and a faint oak flavor. This is Heaven in a glass! 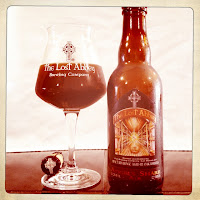 Overall: Smooth, lightly carbonated, boozy and easy to drink despite the 12.5% ABV, The Lost Abbey The Angel's Share Ale Bourbon barrel-aged English Style Barleywine is epic.  I am going to see if I can find some more of this despite the price.  I loved this one!

Mark Harvey
If you haven’t already, please like the NorCal Beer Blog on Facebook (here)
Posted by Mark Harvey at 5:40 PM