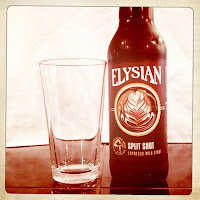 From the Elysian Brewing company Commercial Description/Press Release (here): "In Seattle, beer and coffee grew up together. They’re like siblings, jealously balancing the day between go-go and go-slow, dividing the hip and tattoo’d into brewers and roasters, barkeeps and baristas. Split Shot Coffee Milk Stout combines the talents of Elysian Brewing and Lighthouse Roasters, and commemorates not only Seattle Beer Week as its official beer for 2012, but the fact that it took a lot of talk and lot of Lighthouse coffee to get Elysian off the ground back in 1996. Split Shot has a radically complicated malt bill, with C-15 and C-45 dextrine malts, Franco-Belges kiln coffee malt, Black, Roasted and Chocolate malts and flaked oats. It’s bittered with Magnum and slightly sweetened with milk sugar. OG 16 (1.065); alcohol 7.25% by volume., Split Shot is the official beer for 2012 Seattle Beer Week. Available in select Seattle area restaurants, bars and stores, on draft and in 22-oz. bottles." 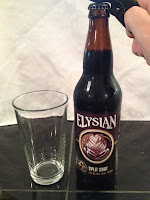 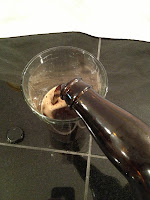 Appearance: Pours nearly black with a tiny tan head and no lacing to speak of. 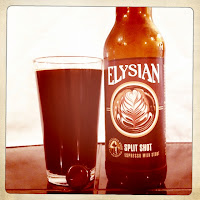 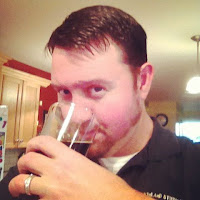 Taste: Loads of espresso, roasted and chocolate malts.  There is a touch of sweetness from the milk sugar. 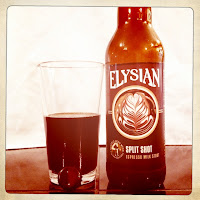 Overall: Super smooth and exceptionally tasty, Elysian Brewing Company’s Split Shot Espresso Milk Stout is a beer to seek out.  At 7.25% ABV it isn’t as big as some of the Stouts I drink, but is it refreshing like a coffee drink with the benefits of being a beer.  I love coffee and I love this beer.