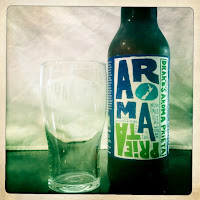 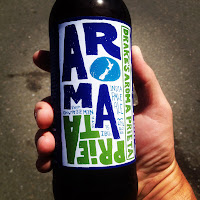 Tonight’s second featured beer is Drake's Brewing Company Aroma Prieta IPA.  This past weekend Drake’s had an unveiling of their newest brew, Aroma Prieta along with the release of Aroma Coma.  I headed down to the Barrel House to get in line and acquire my bottles of both (two Prieta and four Coma).  I brought my sister-in-law along so I could get a couple more bottles of Prieta since I didn’t know if I’d see this beer again and didn’t want to be limited to a mere two bottles.  I love the scene at the Barrel House on release days.  There’s a buzz in the air and the usual Drake’s faithful are always there, in line and patiently waiting for the Barrel House to open and give them their first taste of a new offering.  Saturday was no exception and I eagerly awaited my first crack at Aroma Prieta.

From the Drake’s Brewing Company website:” Shake out from Aroma Coma with Aroma Prieta. Aroma Coma’s sister beer mirrors its twin starting with primarily American 2-row barley malt and a touch of Caramalt for body. From there, we turn things upside down. This time, Prieta leaves behind Aroma Coma’s North American hops for some Southern Hemisphere hop action. New Zealand hops Nelson Sauvin, Pacific Jade, and Motueka and Aussie hop Helga in the double dry-hop give Aroma Prieta huge notes of tropical fruit, gooseberries, and grapefruit. Like Aroma Coma but different: breathe in these hops and enjoy. — Available in August in limited release.” 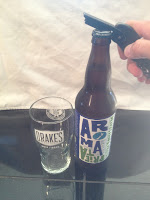 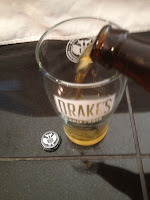 Appearance: Pours a pale golden orange with a frothy and dense white head and great lacing. 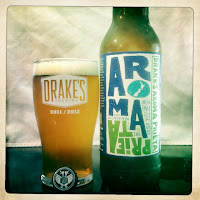 Aroma: Tropical fruits and citrus hops dominate the nose with some pine notes. Biscuit and caramel malts round out the aroma.  Distinctly different from Aroma Coma and fantastic. 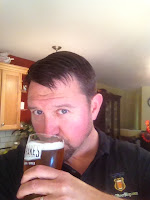 Taste: A bit more tame than I would imagine with not a giant hop bite, Aroma Prieta has great hop flavor with pineapple, grapefruit, tropical, floral and pine bitterness.  Balanced nicely with caramel and pale malt notes.  Enjoyable and refreshing. 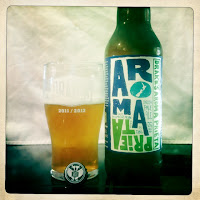 Overall: Incredibly drinkable with a great hop profile, bitterness and balance Drake's Brewing Company Aroma Prieta IPA doesn’t disappoint. The New Zealand hops add a fantastic twist to one of my favorite IPAs (Aroma Coma).  This is an offering I’d line up to pick up anytime.  At 6.75% ABV I could easily enjoy a few pints.