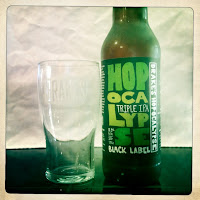 Tonight’s featured beer is Drake's Brewing Company Hopocalypse Black Label Triple IPA.  On February 4th I waited in line to pick up this gem of a beer.  Drake’s has done a great job building the hype for their releases, particularly the ones that won’t be available outside of their Barrel House.

From the Drake’s Brewing Company website:” What rough beast’s hour has come round at last? It’s Drake’s Hopocalypse Black Label- A Triple India Pale Ale. From a foundation of American 2-row, Maris Otter, Caramalt and Vienna barley malts, a hopped-up tide of Magnum, Chinook, Zythos, and mysterious experimental varietal HBC342 is loosed, and everywhere, your innocent tastebuds will be drowned with revelations of citrus and pine. The darkness drops again but now I know… The End is Beer. — Available in February in limited release.” 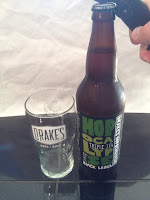 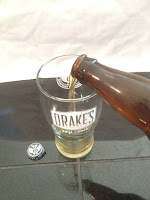 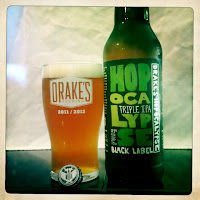 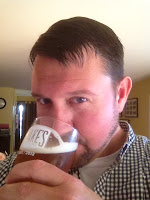 Taste: Nice upfront and big citrus and pine hop flavors with sweet caramel malt to follow.  Great balance between the hops and malt.  The alcohol is very well hidden making this one dangerous. 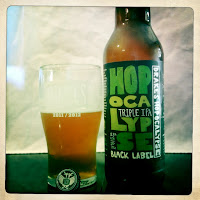 Overall: Drake's Brewing Company Hopocalypse Black Label Triple IPA is fantastic.  Since there was a two bottle limit at the Barrel House readers might find it impossible to partake in this one unless Drake’s decides to fully release this one to stores. My hope is that they brew this for distribution as it is a very well done Triple IPA.  At 12.5% ABV I plan to savor the next bomber I open and then wish for the day when I see it once again. Drake's continues to be one of my favorite breweries.