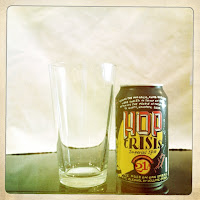 From the 21st Amendment Brewing Company website: “Shaun and Nico have to break out of Alcatraz. And fast. The Hop Syndicate is hoarding hops, depriving the people of their right to hoppy, aromatic beer. Join Shaun and Nico on their adventure to Free the Hops! First, they plan a daring escape through the sewer pipe, then they surf monster waves on ironing boards, and finally they attempt a high speed cable car getaway.
Hop Crisis. Crisis? What Crisis? A few years ago, when hop prices shot through the roof and the worldwide hop market went into a tailspin, at our pub in San Francisco we decided there was only one thing for us to do. We made the biggest, hoppiest IPA we could imagine and aged it on oak for good measure. This Imperial IPA breaks all the rules with more malt, more hops and more aroma”. 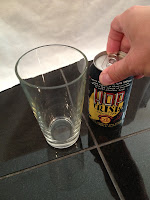 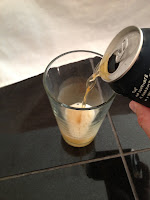 Appearance: Pours a clear golden color with a huge off-white head and lots of lacing. 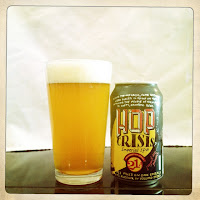 Aroma: Sweet citrus hops, caramel malt and oak.  There’s a lot going on in the nose on this one…lots of fruit scents (apple) and sweetness. 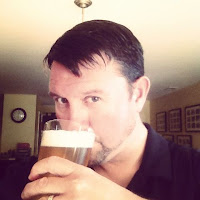 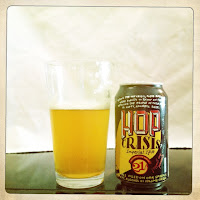 Overall: At 9.7% ABV 21st Amendment Brewing Company’s Hop Crisis Imperial IPA is incredibly drinkable.  The combination of hops, malt and oak make this one of my favorites. I recently brought some camping and the combination of the campfire and this beer was perfect.