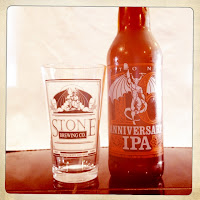 From the Stone Brewing Company website: “We've been loving creating Collaboration beers with great creative brewers from all over the world these last several years-unique beers that would never have existed without the free-flowing imagination and idea generation of the collaborative process. However, when it comes to the Stone Anniversary Ales, it's all us. Yet, it is indeed still a collaboration with great creative brewers (if we do say so ourselves). We're talking about our own brewing team, of course. And while some of our beers, anniversary and otherwise, have been designed by a single person, the Stone 16th Anniversary IPA was definitely a team effort.

This year our brewing team was inspired by some exotic-ish additions of the lemony persuasion. Yes, it's a Double IPA (can you really say you're surprised?), but as we strive to do with all our Stone Anniversary Ales of the let's-take-this-IPA-in-a-new-direction variety, we've brewed up a Stone-worthy divergence from tradition. The amount of rye malt we used isn't quite enough to warrant the appellation "Rye IPA," but it still adds hints of spiciness that contrast deliciously with the tropical fruit flavors and aromas of the Amarillo and Calypso hops. Add a few European specialty malts, some lemon verbena, and three more hop varieties to the mix, and you have a highly complex brew melding both bitter and fruity hop notes with rich toasted malt character punctuated by nuances of spicy rye and subtle lemon.” 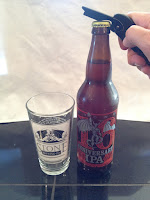 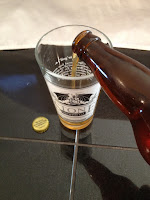 Appearance: Pours a light golden amber with a large fluffy white head and tons of lacing. 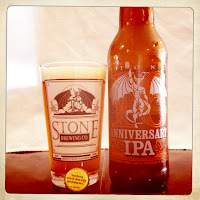 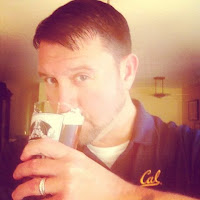 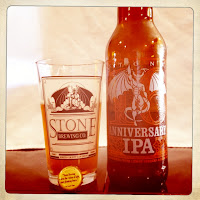 Overall: Very refreshing and complex, Stone Brewing Company’s 16th Anniversary IPA is over the top good.  At 10% ABV the alcohol is very well hidden so be careful.  I wanted to open another 22 after I finished the first, but then the ABV caught up with me and I thought, maybe not tonight.