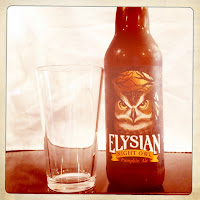 Tonight’s featured beer is Elysian Brewing Company Night Owl Pumpkin Ale.  Here’s another excellent acquisition I purchased from LetsPour. I plan to review as many new pumpkin beers and seasonal releases as I can during my favorite season, Halloween.

From the Elysian Brewing Company website: “A very drinkable pumpkin ale—brewed with seven and a half pounds of pumpkin per barrel and spiced in conditioning with ginger, cinnamon, nutmeg, cloves and allspice. MALTS: Pale, Munich, Crystal, HOPS: Lightly bittered with Magnum, SPECIAL: Both roasted and raw pumpkin seeds are in the mash, with pumpkin added to the mash, kettle and fermenter.” 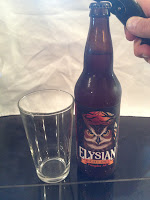 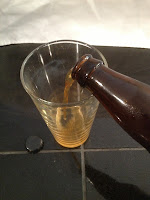 Appearance: Pours a dark orange with a thin off-white head and nice lacing. 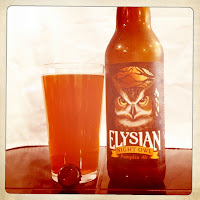 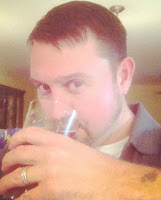 Taste: Nothing short of incredible.  All of the spices are in perfect proportion, sweet malt and light hop crispness.  I had my wife try this one (she doesn’t typically like pumpkin ales) and she said she could drink this one.  That’s HUGE! Aside from Southern Tier’s Pumking, this one is way up there on my list. 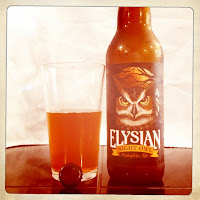 Overall: Moving into one of the top positions of this style in my book, Elysian Brewing Company’s Night Owl Pumpkin Ale is creamy and smooth and incredible drinking.  At 5.9% ABV I found myself wanting another bomber.  I wish this was locally available and in six packs although that would be dangerous.