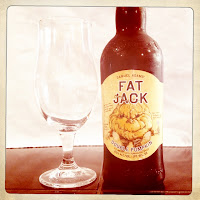 Some folks can’t stand pumpkin beers while others (like me)  look forward to these seasonal releases and although I wouldn’t solely drink pumpkin beers I do like to have one from time to time to celebrate the coming of Fall.  When I saw this one in the store I figured I’d pick it up and try it.  I don’t typically gravitate toward Samuel Adams’ beers, but for review purposes I thought I’d give it a try.

From the Samuel Adams website: “Pleasantly plump and satisfied.  This rich and luscious brew indulges in flavor with over 28 lbs. of pumpkin per barrel, for a full bodied sweetness and deep russet color.  Classic pumpkin pie spices like cinnamon, nutmeg, and allspice ignite a warmth and spark that’s deepened by an undercurrent of roasty smoked malts.  The result is a delectable brew full of enveloping layers of flavor and spice.

Pumpkin Ale is one of the oldest beer styles that originated in America.  When New England colonists lacked some of the classic beer ingredients they turned to what they could find or grow themselves.  In place of malt they used other fermentable sugars such as molasses, squash, sweet potato, or pumpkin.  Alas, pumpkin beers weren’t too popular at first since the pumpkin was used for its sugar alone rather than its flavor.

Today, pumpkins, along with other traditional pumpkin pie spices, are used in addition to malt to create these fall favorites.  Craft brewers have also taken these to the next level by creating double or imperial versions, amping up the strength, flavor, and spice.

For years we have been brewing a pumpkin ale for our brewery Halloween party using local pumpkins.  We began experimenting and found that the richness and smoothness of the roasted malts and pumpkin could be brought to a new level in a much stronger brew.
For our version of a double pumpkin the flavor is more potent on all fronts.  We use over 28lbs of real pumpkin to give this brew a deep smoothness, full body, and true pumpkiny flavor.  The pumpkin is combined with a rich smoothness from its abundance of roasted malts as well as its strength.  A hint of smoked malt creates further dimension to enhance the roasted character.  All of these decadent flavors are brought together with by the familiar fall spices of cinnamon, ginger, nutmeg and allspice for a hearty and warming fall treat.” 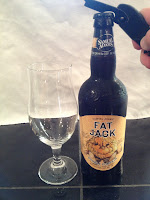 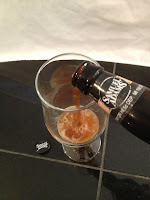 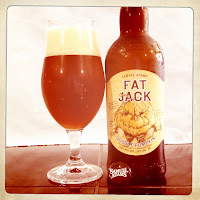 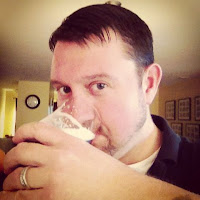 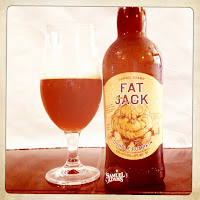 Overall: Well…I’m very impressed with Samuel Adams’ Fat Jack Double Pumpkin Ale and can honestly say I’d purchase it again.  All of the flavors are balanced perfectly for an incredibly enjoyable drinking experience.  At 8.5% ABV it leaves room for another one (unfortunately I only bought one). Guess I’ll be adding this to my “do buy” list.