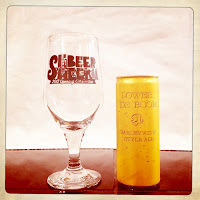 Tonight’s featured beer is 21st Amendment Brewery Lower De Boom Barleywine Style Ale. I picked this one up at Mission Liquors in Fremont. I like the fact that they sell singles so I don't end up committing to a beer I don't know if I'll like.

From the 21st Amendment Brewery website: “In 1859, Shaun and Nico arrive in San Francisco for the gold rush. Ten years late. That was Shaun’s fault. They stop in Cornelius De Boom’s supply store. Cornelius pegs our boys as suckers and sells them a forged “treasure map.” Shaun and Nico find themselves in a dinghy in the middle of the Bay. “Curse you Cornelius!” Jumping in anyway, Shaun finds two boxes of riches: In one, gold ingots; in the other, a rare and perfectly preserved beer. Suddenly, the dinghy springs a leak! They leave the gold and grab the beer. With this “liquid gold,” they become beer barons. They acquire De Boom Supply and throw Cornelius out the back door. Today whenever anyone gives them trouble, they exchange a look across the pub and say, “Lower De Boom.” Lower De Boom is a powerfully balanced American-Style barleywine packed with citrusy Pacific Northwest hops. Chestnut brown in the glass with notes of toffee malt, fruitcake, toast, piney hops and more than a hint of alcohol. Our liquid gold is the first American craft beer in a can offered in the traditional barleywine “nip” size. Perfect to enjoy sipped at the end of a long day. More than that and you might feel like the boom has been lowered on you.” 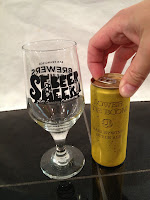 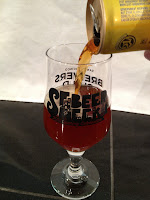 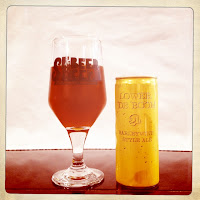 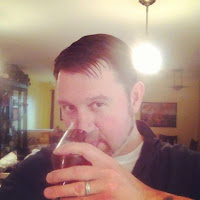 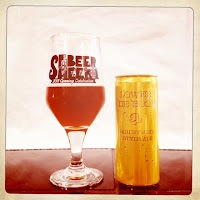 Overall: I must say that the 21st Amendment Brewery Lower De Boom Barleywine Style Ale is a GREAT beer so much so that I immediately went out and bought more (since I had only purchased one can).  This 11.5% gem is a must for fans of the style

Mark Harvey
If you haven’t already, please like the NorCal Beer Blog on Facebook (here)
Posted by Mark Harvey at 5:26 PM