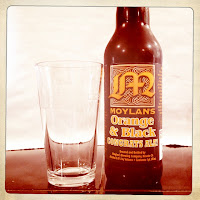 Tonight’s featured beer is Moylan's Brewing Company Orange & Black Congrats Ale. As a life-long San Francisco Giants fan I knew I had to pick this bottle up when I saw it at Artisan Wine Depot (here).

Commercial description: “In honor of the 2012 World Series Champions, and in anticipation of the 2013 Major League Baseball season, Moylan’s Brewery & Restaurant is releasing a freshly brewed batch of the Orange & Black Congrats Ale, on Saturday, March 30th, 2013. A smooth American Black Ale brewed with orange zest, this hearty brew isn’t just for the bleacher bums!  Made with North American two row malt from Gambrinus Maltings in British Columbia, even fans of those others teams will enjoy this grand slam of a brew. Some of the robust flavors in the beer can be attributed to German-grown barley supplied by Weyermann Malts and Mt. Hood and Liberty hops grown in the Yakima Valley by Puterbaugh Farms for Hops Direct. All the oranges used in this batch were grown locally in the California sunshine. This special ale is a reflection of the many dedicated hearts and minds needed to brew a quality beer.

As Moylan’s Brewery & Restaurant welcomes back the Bay Area’s ball club, it is proud to offer an adult beverage in salute to the Thrill, the Bat, the Stick, the rally thong, the crab, the seal, the golden voices in the booth and all of the baseball legends that helped them see the dream become reality, twice in three years!” 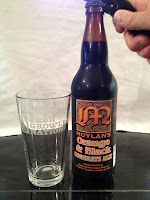 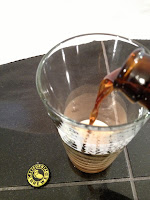 Appearance: Pours a dark brown with a nice tan head and spotty lacing. 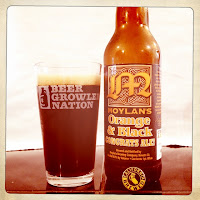 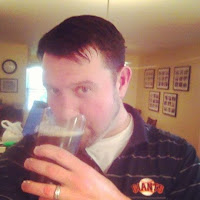 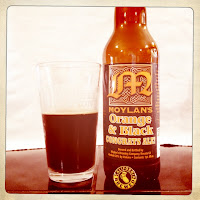 Overall: I’m glad I had the chance to try Moylan's Brewing Company Orange & Black Congrats Ale.  At 6% ABV the combination of roasted malts, orange peel and hops went down smooth and easy.  This may not be a “go to” beer for me, but I’d certainly try it again in honor of the San Francisco Giants!

Mark Harvey
If you haven’t already, please like the NorCal Beer Blog on Facebook (here)
Posted by Mark Harvey at 6:10 PM